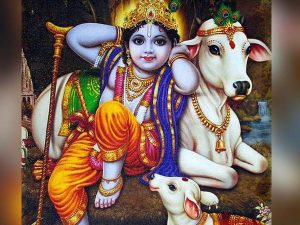 The life of Bhagavan Sri Krishna is an illustration of how an ideal, exalted life is to be lived. The best commentary on the Bhagavad Gita is the life of its own author. Sri Krishna lived what he taught and he taught what is of the highest and of the greatest value. Sri Krishna was an integral person who led the integral life with the consciousness of the integral Reality. He was one of the busiest possible beings, a matchless statesman, an expert in every art, living in the midst of a large family of heterogeneous temperaments, undertaking to bring peace to the earth by destroying antagonistic powers and raising up the down-trodden Dharma. And yet, with all these multifarious activities of an all comprehensive type, he was continuously rooted in the Omnipresent, Eternal, Absolute Consciousness. He was a synthesis of the One and the many, a reconciliation of the Unmanifest and the manifest, a soldering of the Infinite and the relative. For Krishna, there is nothing to acquire and nothing to renounce, for He is the Conscious Truth within both the opposites. He is a synthetic man who acts with prudence in this world, whose actions are based not on personal interests but on Truth-consciousness, not on the particular but the General Being. Hence, to become complete and perfect is to become a Krishna who was complete and perfect.

In everyone, there is this ideal, Krishna, hidden within. Everyone is a potential Krishna. The Krishna-consciousness is already in you; you have only to manifest it through self-discipline and meditation. To live the philosophy of the Gita means to become Krishna Himself. In spite of distractions of the world, Krishna keeps up the unbroken relation of self identity with the highest Spirit No greater man and yet no greater Divinity has ever appeared on earth than Sri Krishna. The same Krishna, the friend of the simple cowherds, the same humble servant who washed the feet of the guests in Yudhishthira’s royal sacrifice, was that all-devouring Virat the Universal Being, that dazzled the representative of man, Arjuna, and struck him with all awe. We do not find another to be compared with this glorious example, either as a perfected individual or as the revelation of the Supreme Being.

The ideal of Sri Krishna is the one to be striven for by everyone through renunciation for the sake of knowledge of the Self. To be in the world and yet out of the world, to see the universe of plurality in the light of unity, to be man and yet know the Spirit in man, to work in the world and yet be untouched by its ways, to work as a master, to live like God, to work as a devoted, humble servant of all, to sport in the relative while resting in the Absolute, is the lesson which Sri Krishna teaches to the world.

Become yourself Krishna, the Ishwara moving on earth, by practising the Yoga of synthesis which is the theme of the Immortal Bhagavad Gita.

May you all shine as Krishnas!