Players sit in a circle. The first player, says, ‘Ha’. The second player says –  Ha, Ha. The third player says, ‘Ha-Ha-Ha and so on, each player adding another Ha. Each Ha must be pronounced solemnly. If any player laughs he (or she) drops out of the circle. The eliminated players are free to do anything to make the other players laugh. No touching is allowed.

The instructor stands in the centre and asks the players sitting (or standing) in a circle to call numbers progressively in the ascending order, alternatively in different two (or three) languages, i.e., if the first person says “ONE” in English, the next should say  “DO” in Hindi, 3rd person “THREE” in  English, 4th person “CHAIR” in Hindi and so on. Those who don’t follow the order correctly are out.

The conductor calls out any number from 1 to 12. The players have to assume that particular posture of Surya Namaskar. Those who make mistakes are out. 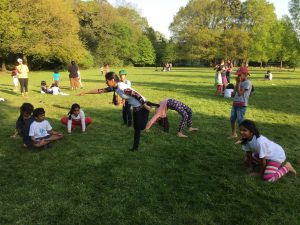 Note: As per Vivekananda Kendra’s method, we complete surya namaskar in 12 counts.

Five empty, long and narrow mouthed bottles are kept on the ground. A little distance away a bucket of water is kept ready. Players are made to stand in a line one after the other in front of the buckets. Number of bottles, number of buckets and number of lines should be the same. Each line should contain equal number of players. When the whistle is blown the first player from each line will carry the water in his hands and run towards the respective bottle and pour the water into the bottle. After emptying his hands he will repeat the same. The game goes on till any one of the bottles is filled. That group wins which fills first.

Half the players are asked to write the names of a country each and the rest to write the capitals of those. The chits are mixed together and then every one takes one chit. If the name of a capital is written on his chit, he tries to find out the player who has the chit bearing the name of the country to which the capital belongs. The player while enquiring should not be audible to others. The player succeeding first wins.