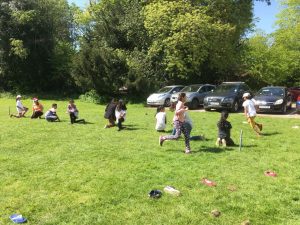 The player form a circle, linking their elbows. Then they pull as hard as they can to break the circle. The first two players, whose arms are un-linked are out. The remaining players form another circle again, smaller this time, but just as tight. No stopping is allowed, till the break occurs.

If the circle, seems invincible and does not look as if anyone is going to un link their arms, ask them to take 3 steps towards the middle of the circle and then quickly take 3 steps back. This will create, a break.

All stand in a big circle. The minimum distance between two players should be about 10 feet. Now every player has to jump once turn by turn in such a way that he will be able to make other player out. After taking  a jump the player ‘X’ should stand erect and if his stretched hand touches the other player say ‘Y’, then ‘Y’, is out. Then ‘X’ gets the chance of second jump for making another player out.

The players form a circle. One half of the players become horses and the remaining players riders. At the ‘start’ signal, the riders have to get down from their horses, run around the circle and come back and ride their respective horse again. The last three riders are out and they become horses and their horses becomes riders. When both the rider and the horse are out that pair sits in the centre of the circle. The rider who remains till the end wins.